Week one of school is finished, and I survived. Unbelievable. Because, let’s be honest here, getting the kids back on a school schedule after the summer is much harder work for Mom than for anyone else in the family. I’m not a morning person, and quite probably neither are my kids, whether it’s survival instinct (who knows what I would have done with one of those children who wakes up every morning at 6.30 all chirpy and talkative?) or their natural inclination I have no idea, either way, I tried to bring their wake up time up (and consequently all the related sleep times up) for the two weeks prior to this and I clearly failed, if the amount of tantrums, hysterical, over-tired crying fits, middle of the night wake up calls, and generalized grumpiness are any indication. I’m hoping this week will be better.

Although, as I started planning their weekly activities I already wanted to pull out all my hair… I don’t know how mothers with more than two kids do it (and I quite envy mothers of singletons right now, for organizational purposes, at least). The Boy wants to play soccer this year, they start them at 6 here, but as he’s tall they’ll take him anyway, the Girls wants to do a dance class, and I would like them to do a swimming course before the start of the skiing season. It shouldn’t be that complicated, I thought, I don’t want to over book them, but an activity each and a joint one shouldn’t overextend us. I am so naïve.

Oh, and I need to keep one afternoon for their American babysitter because I’ve realized that when they have someone (other than me) who speaks English to them they’re more prone to speak it in general. Easy peasy. Right.

So, this is what I found out after a round of calls and a couple of hours of scheduling: soccer is Tuesday and Friday, because apparently 5-6 year olds who aren’t allowed to play in the tournaments and who are basically going to chase a ball around a field for an hour and a half need to “train” at least twice a week. Every single dance school but one in this god forsaken town, in an evil conspiracy to drive mom’s insane (I presume), decided that Tuesday was the only logical day for the 3-4 year old dance class, and the one that went against the mold already has a waiting list. Oh, and by the way, our lovely American babysitter only has one afternoon off from her primary job. Guess which day. Tuesday. And after a half hour of route planning and head banging (not the heavy metal kind) I resigned myself to the fact that without the aid of cloning or a teleporter there is no way I can get them both to their activities on Tuesday. Seriously, how does everyone else do it?

Anyway, before letting myself get sucked into the insanity of a new school year, I’d like to wrap up our summer. We got back from our extremely long vacation to a garden that looked like this: 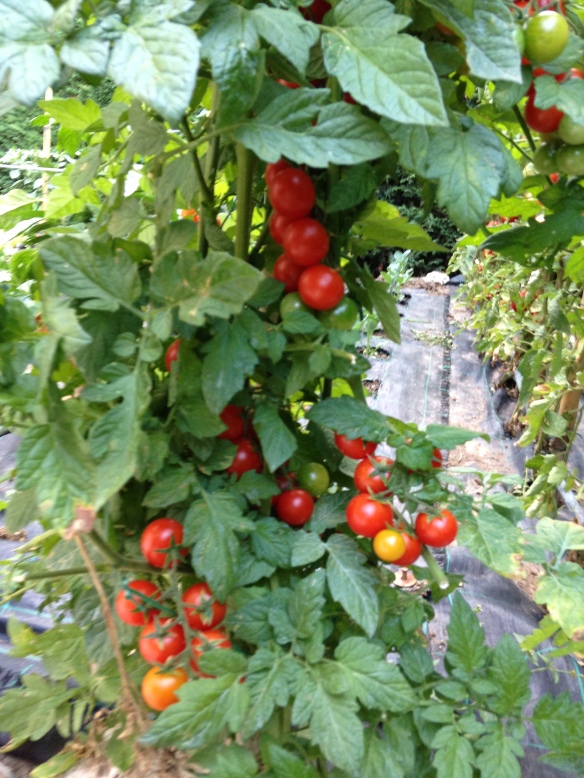 Peppers, I have eight plants of lovely green, yellow, and red peppers. Not as pretty as the supermarket ones, but yummy all the same.

So we had a LOT of this:

Caprese salad – the tomatoes and basil are from the garden, as is the basil in the pesto. 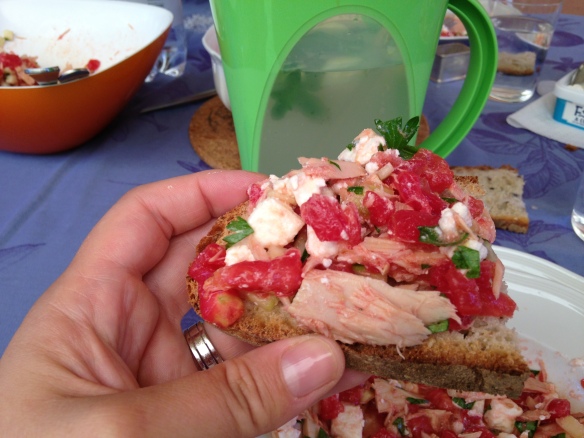 And since this was overflowing:

so creamy makes me hungry again…

Have I made you hungry yet?

I’m slowly getting my act together again with the start of a new school year. I’ve got several posts I think you’ll like in the works, and I’m pretty confident I’ll even manage to finish them and post them, so yay for school, despite the scheduling headaches. 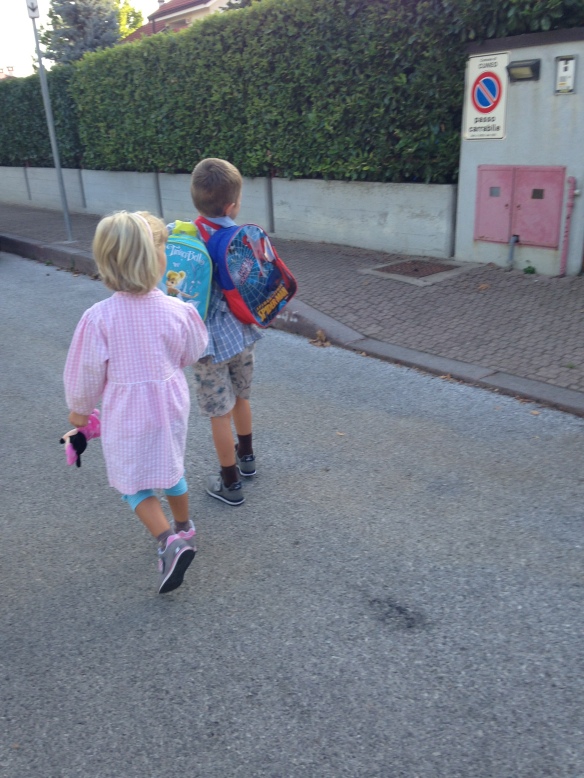 Two cutie pies on their first day of school. Sweet brother carrying his sister’s backpack. A little southern gentleman in the making.

1 thought on “One week down, how many more to go?”